Carmy began her career working in the public education system, first in the Olathe School District as an interpreter and then in the Independence School District as a Family School Liaison. After gaining experience in early childhood behavioral, emotional and psychological evaluations and intensive in-home case management, Carmy’s interest in clinical social work blossomed and she began looking for opportunities to transition to a clinically focused practice. In 2011, Carmy was hired on at SAFEHOME, Inc. and became a full-time Bilingual Clinical Therapist for 7 years. In addition to her work at SAFEHOME, Carmy expanded her experience by working part-time as a Bilingual Clinical Therapist at the Child Abuse Prevention Association in Independence, MO and by facilitating play therapy workshops all across the Midwest.

Carmy supervises individuals pursuing their Kansas and Missouri clinical social work licensure and registered play therapy credential, as well as served on the Kansas Association for Play Therapy (KSAPT) board as Conference Chair and President. Carmy is co-owner of Heartland Play Therapy Institute and believes that Play Therapy is an essential tool for understanding and processing trauma through the eyes of the child. 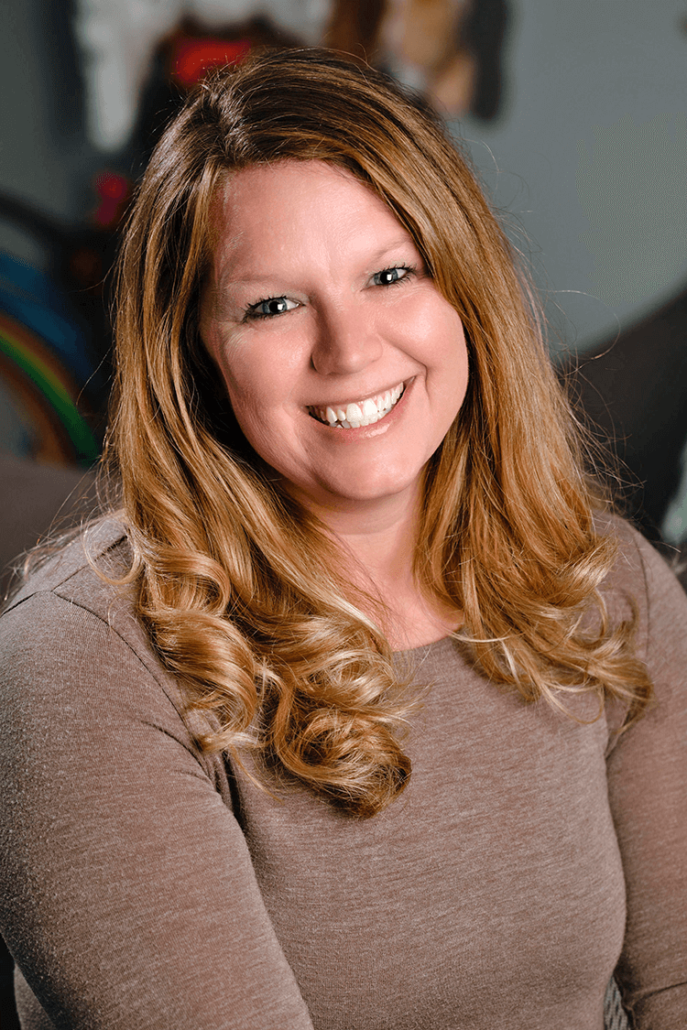 Amber obtained her Bachelors of Arts degree in Psychology from John Brown University, her Master’s degree in Counseling from Mid America Nazarene University and her Play Therapy Certification from KC Play Therapy Institute.

Amber began a love of helping others in high school, dedicating summers to being a camp counselor with inner city children, youth camps and adolescent girl camps. During her graduate program in Counseling, Amber completed her internship at SAFEHOME, providing therapy to victims of domestic violence. Shortly after completing her graduate degree, Amber was hired as a full time Clinical Therapist providing individual, family and group therapy for adults and children. Amber was the Clinical Director at SAFEHOME prior to transitioning to Creative Connections.  She now sees adults, children and adolescents at Creative Connections. Amber has expanded her experience by teaching workshops for Heartland Play Institute, providing Play Therapy supervision and providing Clinical Supervision for individuals pursuing clinical licensure.

Throughout her career as a therapist, Amber has pursued training in a variety of therapeutic models including Emotional Transformation Therapy, Resonance Repatterning, Eye Movement Desensitization and Reprocessing (EMDR), Trauma Focused Cognitive Behavioral Therapy (TF-CBT), Psychodrama, Play Therapy, Theraplay and Art Therapy. Amber especially enjoys working with adults and utilizing various techniques to explore inner child processing. She is dedicated to helping clients understand and overcome whatever is getting in their way of who they want to become. She believes that with the proper therapeutic relationship, hard work and counseling, healing can be achieved. She believes that the deeper you are willing to process into your struggle, the greater the change you will see! 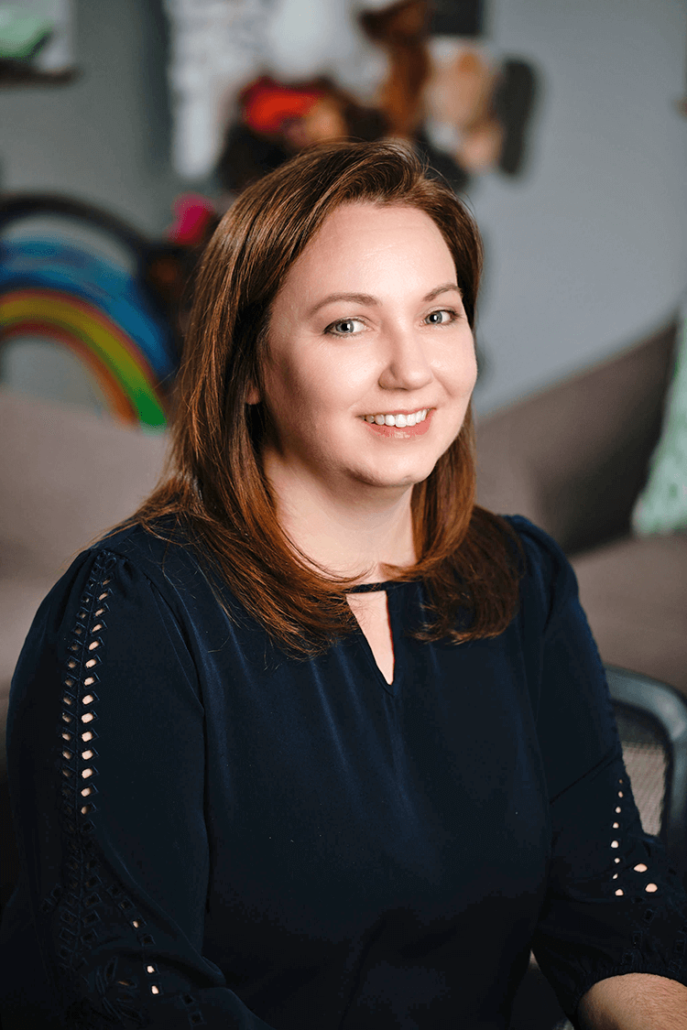 Lori has been working with adults, teens, children and families for more than fifteen years to heal from trauma, overcome anxiety, conquer depression, understand unhealthy relationship patterns, walk through grief, integrate strategies to manage ADHD symptoms, strengthen families, develop insight, build self-esteem and achieve their life goals.  Throughout her career as a therapist, Lori has pursued training and integrated a variety of therapeutic models into her practice including Play Therapy, EMDR (Eye Movement Desensitization and Reprocessing), Trauma Focused Cognitive Behavioral Therapy (TF CBT), Expressive Art Therapy, Sandtray Therapy, Theraplay Attachment Therapy, Psychodrama, Emotional Transformation Therapy, and Resonance Repatterning. Lori is passionate about working with individuals of all ages and believes that the therapeutic relationship has the power to be transformative.

Lori obtained her Bachelors of Arts degree in Social Work with a secondary major in Women’s Studies from Kansas State University in 1999, her Master’s degree in Social Work from the University of Kansas in 2002 and her Play Therapy Certification from KC Play Therapy Institute in 2006.  Lori is licensed as a LSCSW in the state of Kansas and an LCSW in the state of Missouri.  She also maintains the Registered Play Therapist-Supervisor (RPT-S) credential as provided by the Association for Play Therapy.

Favorite Therapy Quote:  “Sometimes I must first struggle before I can discover a strength, and I may never discover that strength if I never have to struggle.”  – Garry Landreth 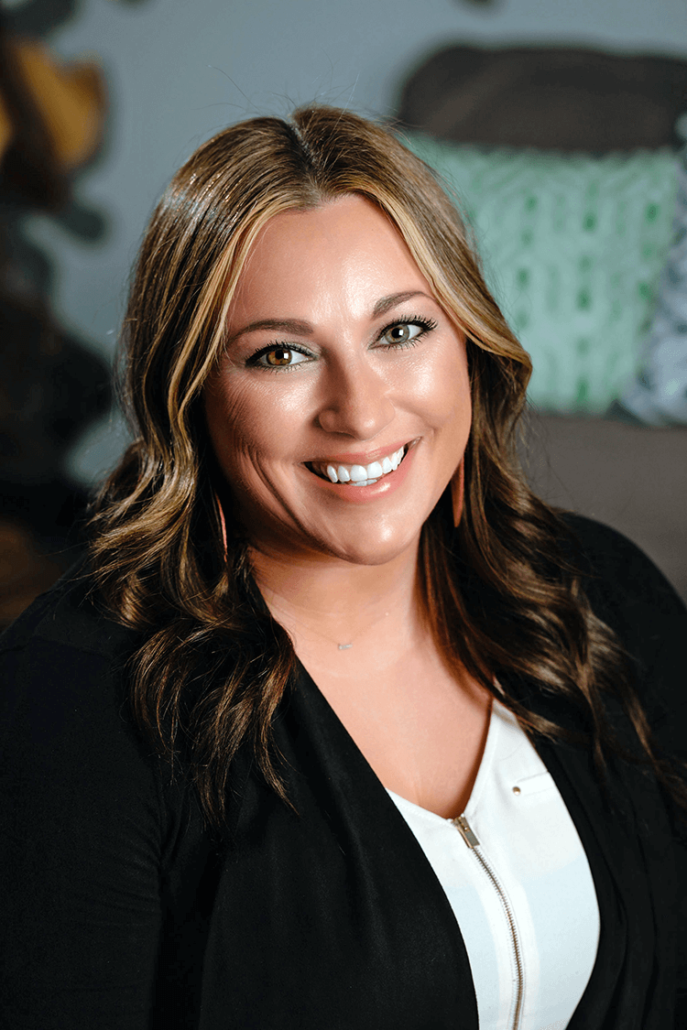 Kat Cahill received her Bachelors degree in Psychology and Sociology from the University of Kansas, and holds a Masters degree in Community Counseling from Loyola University Chicago.

Kat is a Licensed Clinical Professional Counselor in Kansas and a Licensed Professional Counselor in Missouri, and has extensive experience working with children, adolescents, and adults in the individual, group, family, and residential setting. She believes in approaching each client individually and tailors treatment to meet each client and family where they are from the first session. Kat adapts with her clients as they grow and make progress toward their goals.

In her downtime, Kat enjoys swimming, hiking, reading, traveling, patios, cheering on the Jayhawks and Chiefs, and spending quality time with loved ones.

Erin is a licensed Master level Social Worker, currently under clinical and play therapy supervision in Kansas. She obtained her bachelor’s degree and master’s degree in Social Work from the University of Kansas and Play Therapy Certification from Heartland Play Therapy. She is currently working towards her Registered Children Yoga Teacher (RYCT) through Yoga Ed.

Erin has 2 years of therapy experience working with elementary age children in a school setting. Erin completed her master’s level practicum with the WRAP (Working to Recognize Alternative Possibilities) program through Bert Nash Community Mental Health Center. While working for Bert Nash, she primarily worked with adolescents in middle school. After graduating with her MSW degree, she continued to work as a WRAP therapist, this time at two elementary schools in the Lawrence Public School System. While at the schools, she provided crisis intervention, therapeutic interventions, assessment, support services, and intakes to at-risk children and their families. 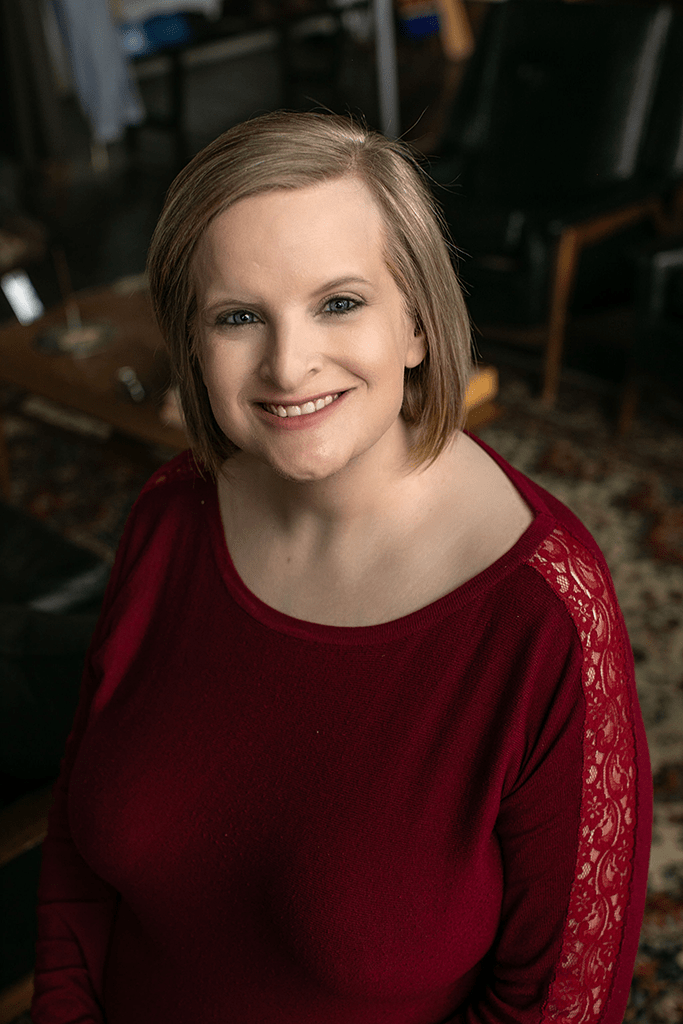 Laura Lester has been working in the social work field for over 10 years. She holds a clinical social work license in both Kansas and Missouri. Laura has experience working in hospital social work, community mental health, case management, and in private practice counseling. Laura enjoys working with children, teens, and adults who have experienced trauma, loss, major life changes, as well as difficulty managing worry, anger, sadness, and other intense emotions.

In her free time, you can usually find Laura spending time with her family, reading, baking, or cheering on the Kansas City Chiefs. 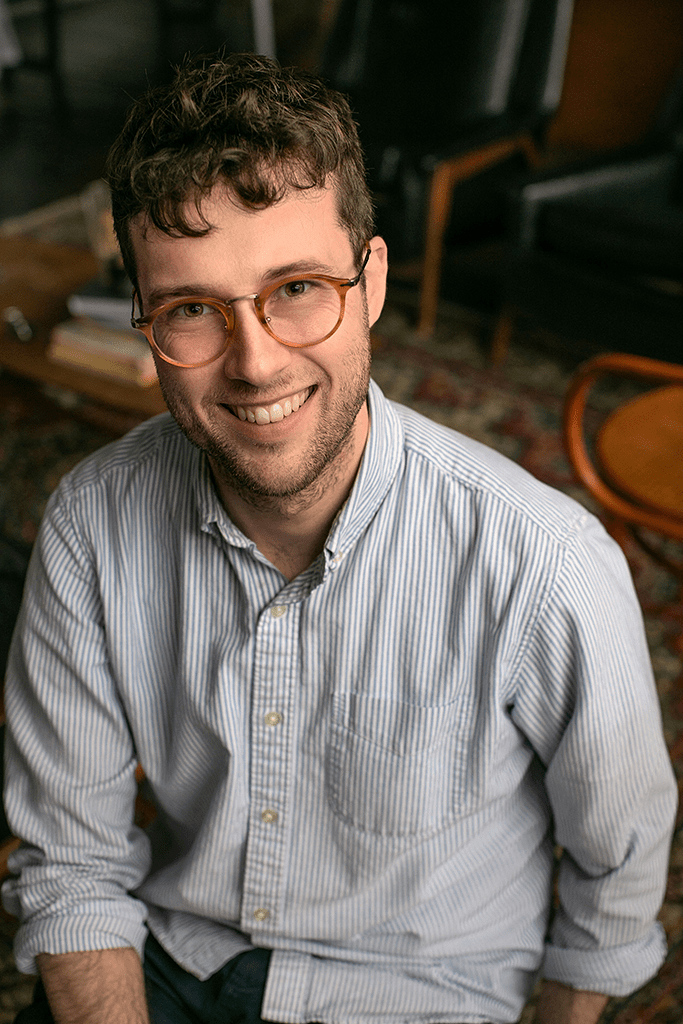 Stephen received his bachelor’s degree in Applied Behavioral Science from the University of Kansas and his Masters in Counseling from the University of Colorado. Stephen started his career as an intern at JS Therapy Group where he was hired right after graduation. Stephen worked with couples and families to build connection, improve communication, explore attachment needs, and create a sense of emotional safety in the relationship. Stephen was also an intern at Safehome. Stephen joined with survivors of domestic violence as they healed from trauma, developed safe and healthy relationships, and reclaimed their independence. Stephen then worked at Bert Nash Community Mental Health Center on the Children and Family Therapy team. Stephen joined with kids and families and used the power of play to build connection, learn coping skills, and learn to express needs in a healthy way. Stephen is honored to be at Creative Connections. He works with couples, families, children, and adolescents.

Stephen values therapy built on empathy, trust, respect, and collaboration. Stephen strives to create an experience free from judgement where people feel safe to explore the most vulnerable parts of themselves. Stephen values a culturally responsive approach and always learning, growing and understanding himself and others in a cultural context.

In his free time, Stephen enjoys taking photos with his film cameras, making music, collecting records, and going on adventures with his wife and dog. 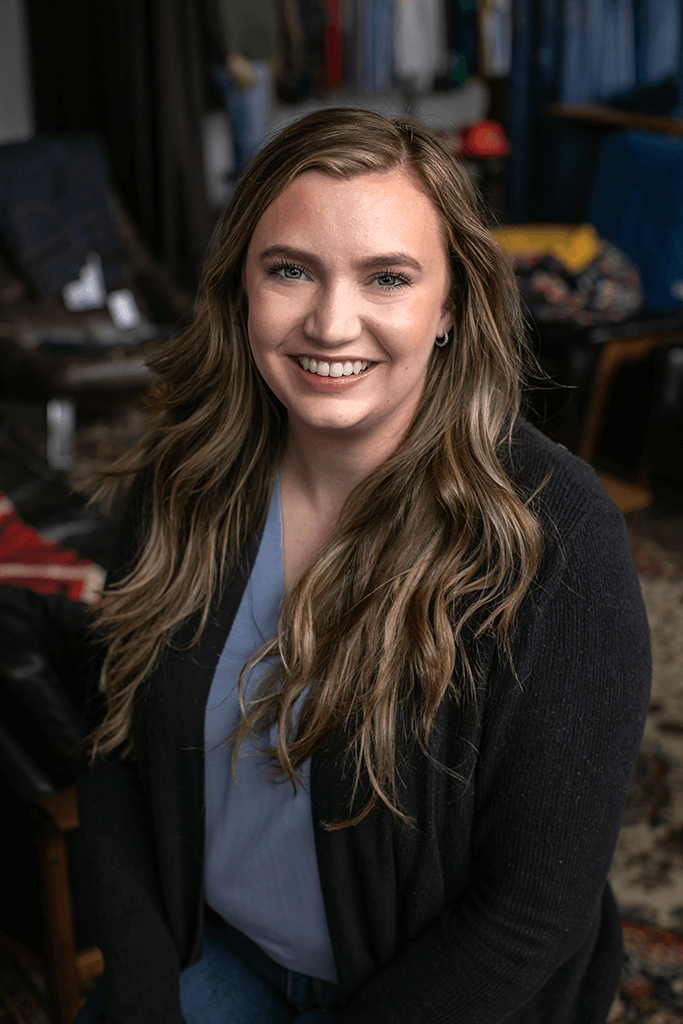 Katelyn is a Licensed Clinical Professional Counselor in Kansas and a Licensed Professional Counselor in Missouri. Katelyn graduated with her Bachelor of Science degree in Family Studies and Human Services, with a double minor in Conflict Analysis & Trauma Studies and Women’s Studies from Kansas State University. She graduated from MidAmerica Nazarene University with a Master of Arts in Counseling degree, where she focused on Marriage, Couples, and Families. Katelyn obtained her Play Therapy Certificate from Heartland Play Therapy Institute and Autism Specialist certification through Kansas Center for Autism Research and Training.

Katelyn empathetically joins with clients wherever they are in their journey. She is committed to being a trauma-informed provider and works to empower her clients to meet their goals. Katelyn values helping her clients understand and heal from trauma, establish healthy boundaries, combat anxiety and depression, and build nonjudgmental self-acceptance and love. 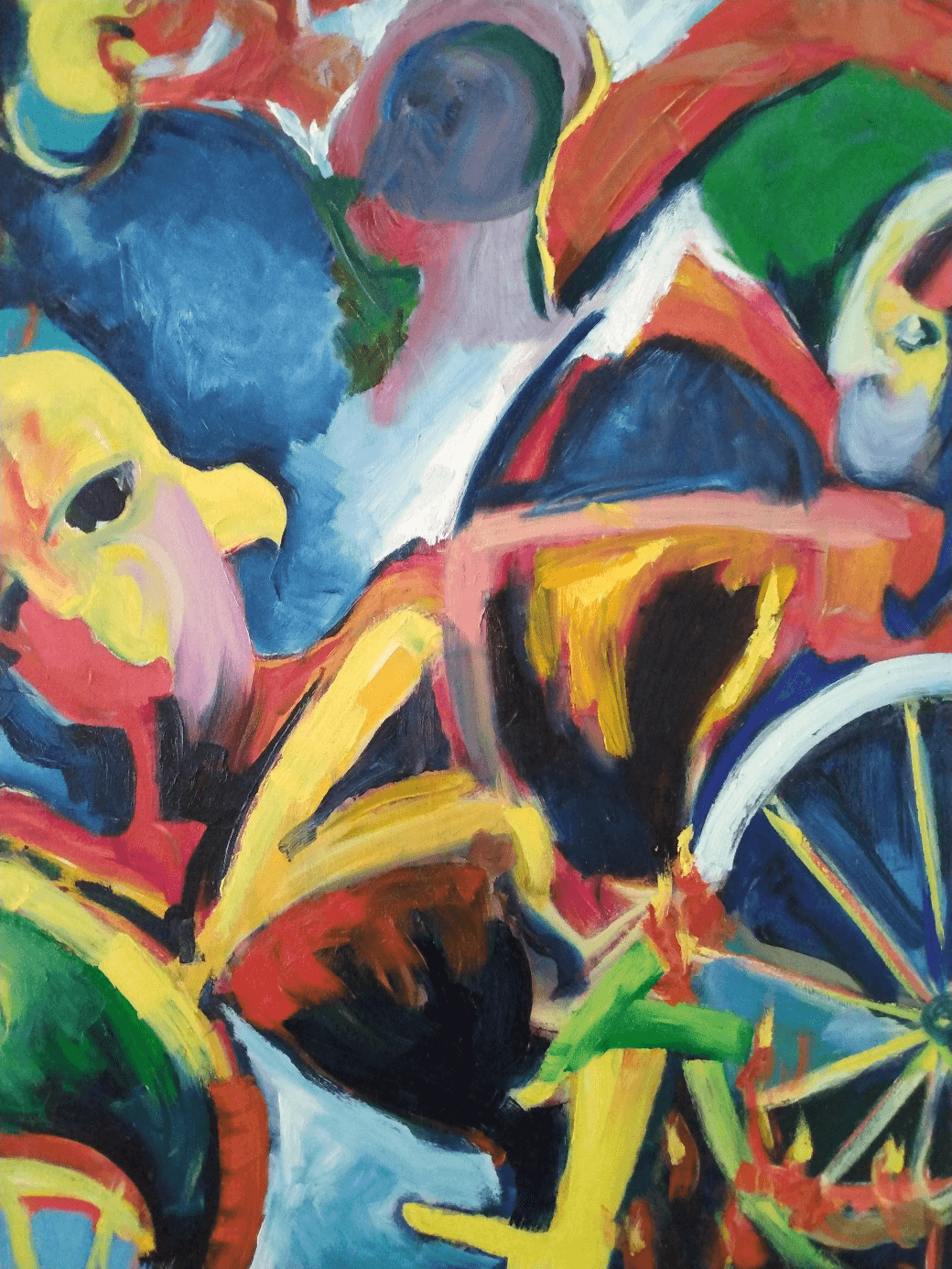 Marcia has been working with children, teens, and adults for nearly 35 years. She has worked in multiple settings helping people who are struggling with trauma, domestic violence, sexual assault, substance use or behavioral addictions; as well as anxiety, depression, grief and loss, ADHD, ASD, and the concerns of the LGBTQ+ community. She is licensed as a clinical professional counselor (LCPC) and an addictions counselor (LAC) in KS. In addition, she is nationally certified as both an Art Therapist (ATR-BC) and a National Certified Counselor: https://www.credly.com/badges/d7461526-bec2-459a-8dbe-
64da99d7ca9d/public_url

Marcia integrates several approaches into her treatment, depending on the needs of each client. She is trained in Object Relations Therapy, Solution-Focused Brief Therapy, Narrative Therapy, and Motivational Interviewing. The creative process, Art Therapy, and Play Therapy are interwoven throughout treatment.

Marcia believes that therapy is a shared journey wherein the client is the expert on his/her/their own life and Marcia’s role is to help each person to visualize, realize, and actualize his/her/their own preferred life. With a strong therapeutic relationship, hard work between sessions, and the instillment of hope, Marcia believes that healing and change can not only be achieved; but also, it can be maintained over time.